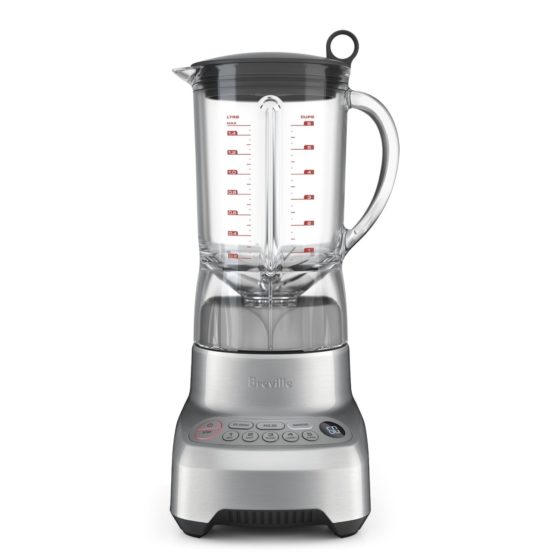 NOTE: This original review was done on the Breville 600XL model.  The 605XL is an upgraded version that solves the issue with a leaking base reported by some. The 605Xl has a 48 Oz pitcher vs. a 51 Oz with the 600XL.  Other than that, the 605XL has identical specifications to the 600Xl which is what I used to do my review. I stand behind this review and feel confident you will get the same, or better, performance from the 605XL

I wasn’t sure what to expect when I decided to review the Breville BBL605Xl iKon Blender smoothie maker. I own two Breville juicers and am very impressed with the engineering and quality that went into each of them and they each work VERY well.

I wanted to expect the same kind of results with this blender but in doing my prep-research, the reviews were all over the place. Some hate it, or more correctly hated a few design areas that I’ll discuss in the review, and some LOVE it.

So, with that in mind, I HAD to order one and give it a good shake down at making green smoothies in order to report my findings to you. How does it blend? Would I have to “chew” my smoothies because the leafy vegetables weren’t quite blended enough? How bout the 48 Oz jar? Seemed a little small to me to be honest. Quality?

Well, after using this blender for several smoothie sessions and putting it through its paces – from first turn-on to clean-up, I feel I’m qualified to report on my findings.

And let me get this out now and first say, this is one “sexy” blender!

Dude! get a life I can hear some of you say.  Hey, I have a passion about my new, green smoothie, whole foods lifestyle and believe me, my blender is a HUGE part of that. I dig getting these things and putting them through their paces and giving you the real skinny on performance. But, point well taken I suppose.

The design team at Breville really did some work coming up with lines and looks of the bbl600xl that you’ll be proud to display on your counter. And that’s where these things belong so you’ll use (and at times abuse) them.

The brushed aluminum look on the base and extending up to cover the bottom of the jar add to the contemporary look. The control panel, jar, cool little ring on the rubber lid…. ALL make this blender scream “C O O L”…

OK, I feel better with that out of my system (I don’t really have a category labeled “Vanity” so I had to stick my take on the looks somewhere). 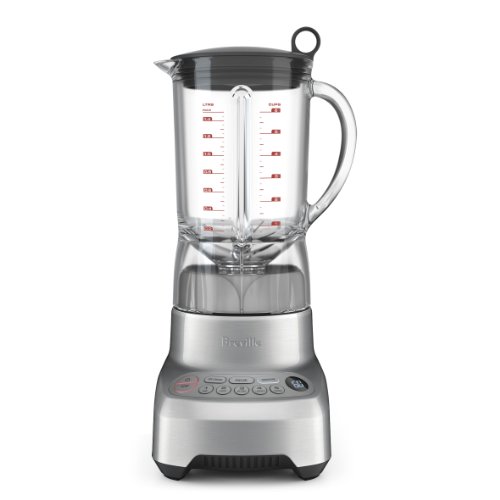 The Breville 605XL blender comes with a 750 Watt motor.  A little on the small side for blenders in this price range. However, I found it more than adequate for everything I asked it to blend.  A lot of that has to do with the jar and blade design which I’ll cover below. I never felt I was taxing the blender past it’s intended function, no matter how full the jar or how many vegetable stems I added.

The control panel is simplistic in it’s design and layout but very functional. I like that. I’m normally making my first smoothie of the day at the crack of “oh-dark-thirty” and my brain doesn’t want to handle anything overly complex.

All buttons illuminate when pressed and the Power button flashes when the unit is turned on in addition to the timer LCD being backlit. There are 5 manual speed buttons, 2 preset buttons – Ice Crush and Smoothie, and the Pulse Button.

Using either the ice Crush or Smoothie preset causes the blender to go through an automatic variable speed and time cycle. Like most blenders I review however, the automated cycle of this blender is not enough to blend up a serving or two of various fruits, both frozen and unfrozen, a variety of veggies including the leafy kind and a little ice.

No biggie for me. I actually prefer to but the blender on high and blend til smooth anyways. If you’re making a fruit-only smoothie though, the 60 second time of the Smoothie preset should be enough.

The LCD timer counts up from 1 to 60 seconds when any of the 5 speed buttons are pressed and counts down when either of the two presets are used (the Smoothie cycle is 60 seconds by the way).

The dimensions are a space-saving 6.5″ wide x 8″ deep x 15.5″ tall. Easily fitting under your cabinets and not taking up much space on the counter.

The container is rated at 48 ounces (6 cups) but in my testing, you should be able to blend up 8 cups, 64 ounces, taking the contents right to the top. It is made of glass, or more specifically “engineering-grade borosilicate glass” according to Breville which means it is specifically designed to resist scratching, pitting and fogging.  Didn’t really know glass jars were susceptible to that anyway. I kinda remember seeing my mom’s 1950’s era blender/glass jar several years ago it it still looked pretty dang good.

The first you’ll notice is the jar as some heft to it. That’s nice because given it’s small size I was a little concerned it might do a watusi dance across the counter as it blended up my 1.5 Quarts of health. Thankfully, it didn’t.

The jar also has easily visible markings on it that start at 1 cup and go to 6 cups. This helps when adding your base liquid to the blend as well as knowing how much of the finished product you’ll be consuming.

I do wish the glass handle had some type of non-slip grip feature since it can get a tad slippery if handling with wet hands.  There are several horizontal knurls where your thumb rests on the handle which help, and I never experienced a problem during my tests but smaller hands might.

The bottom of the jar and specifically the blade assembly form a bowl shaped design at the base of the jar.  When I first saw this I was like “Uh-oh, my smoothies are NOT going to like that”.  But again, I was wrong.  I’ll dig into this a little deeper in the Use section below.

Speaking of the blade assembly, this is THE area you’ll find most of the complaints against this blender.  Specifically, a leaking seal. You can see it in the picture to the right. Unless the blade assembly is snugly screwed onto the bottom of the jar, the seal WILL leak.

Did on mine the first time I used it. I thought I had the assembly snugged up sufficiently but for the third time with this blender, I was wrong.  You want to give it a little nudge passes “tight” when screwing back on. Breville even includes a  tool to remove the assembly for cleaning so that tells me if I can unscrew it with my hand, it’s not tight enough.

Once I discovered this and tightened the assembly properly, I didn’t experience any other issues with leaking.

The lid is rubberized and fits very snugly into the top of the jar so there won’t be any leak issues. Another small but a very nice design feature is the ring sticking up from the lid that allows you to easily remove the lid when needed. No more searching for the lid overhang and wrestling with getting a tight fitting lid off. Nice.

There’s also a nice opening to pour liquid or drop additional ingredients in while blending.  It’s funnel shaped starting with a  2.5” opening at the top of the lid tapering down to 1.5” opening into the jar. Another subtle but very nice design feature which makes pouring additional liquids into the jar much easier.

The aluminum die-cast base has some heft to it weighing in at 6.5 Lbs all on it’s own. It has very clean lines and matching the overall theme of the blender, a very simplistic look and feel to it. The bottom of the base features a cord holder and four rubber feet.

Finally, the plug at the end of the cord has a large finger loop to aid in unplugging the blender. I tend to have slightly wet or damp hands when doing this function so having a way to stick my finger into the plug, away from the prongs and 110V outlet is nice too. 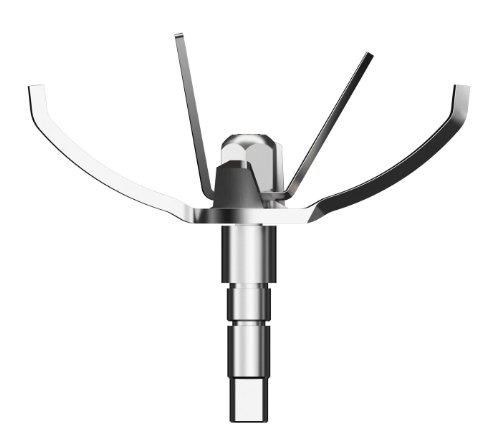 So how does this “sexy” clean looking blender with some innovative design features blend? In a word – impressively. I had NO pre-conceived notions pertaining to anything associated with this blender coming into this review.  I’ve seen top rated blenders frankly stink at green smoothie making and others only perform so-so.

This Breville iKon bbl600xl makes a mighty-fine pitcher of smoothies – whether it be plain fruit, a vegetable only (a la a V8) juice or a green smoothie. Everything I asked it to do it did and did well.

My smoothies came out very smooth and well blended. I did have one session where there were small (very small) chunks of carrots remaining in my smoothie but I attribute that to the way I made the smoothie and not having enough liquid in the mix.

The performance of this blender is due primarily to the bowl-shaped blade assembly I mentioned earlier as well as the  six blades themselves. There is quite a vortex and sucking action created by this design which brings everything down into the blades very quickly during the blending cycle.  The contents are not allowed to merely swirl around the jar but instead are forced down where the different blades can cut and pulverize them into submission, forming a very enjoyable glass of liquid sunshine, health and vitality! WAHOO!

The blender was also quite when performing this magic. Surprisingly quite.  Probably the quietest blender I’ve tested to date. The family will NOT be jolted from a sound sleep every time you push one of the blend buttons on this blender.  Hopefully that might encourage some of them to experiment with their own smoothie making experiences.

I don’t need to go on and on about the performance of this blender. For a smoothie maker it works and works VERY well. Period.

Cleanup is pretty easy as well. I tend to rinse my jars out with very hot water and occasionally add a couple cups of water and a few drops of dish washing liquid and let the blender clean itself.  Given how prone this blender is to leaking if the blade assembly is not tightened enough, why continually remove it?

The lid cleans up well with a quick soap-n-water bath (it is top-rack dishwasher safe if you prefer) without any obvious nooks or crannies for goop to hide.

The buttons on the control panel are all sealed and even the LCD timer doesn’t have any crevices where smoothie-goo can hide. A damp washrag is all that’s needed.

The only accessory included with the Breville bbl600xl is a tool to aide in removing the blade assembly.

CLICK FOR MORE INFORMATION AND PRICING ON THIS BLENDER