Tips on Baking Bread (Learn From My Mistakes!) 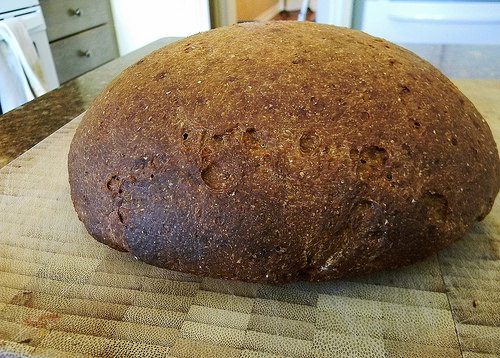 After my last kitchen disaster I thought I wouldn’t have another one for a while. Well, I certainly was wrong about that. Want flat, heavy bread? Just ask me how you can make that happen and I can tell you. Fred and I make bread together. He mixed and kneads it, I pan it and bake it. We made bread the other day and everything was going fine until after I panned the bread.

I remembered to go out and turn the oven on but then I came back to my office and sat in front of the computer and forgot all about the bread. When I finally remembered, about an hour later, and I went to the kitchen, I discovered that the bread had fallen and was flat. I debated what to do, as I had never had that happen before. I debated taking it out of the pans and re-panning it and letting it rise again. However, I decided against that and put it in the oven to bake. Big mistake!

It didn’t rise one bit and I knew I had really cooked my goose this time. The bread baked and was duly taken from the oven and it was level with the top of the pan. Not much air in that! And it certainly wasn’t light, either! So then I began to check around for information and discovered that I would have been far better off to re-pan the bread and let it rise again. Oh well, so much for checking up on the facts before making a decision!

However, one good thing I can say for myself. When I make a mistake like that I know enough not to repeat it. So I can confidently say that we won’t have to live with flat bread again, at least not from this same mistake. And to help me keep better track of time when I’m on the computer, I’ve deided to invest in a timer so I can remind myself when I need to go do something.

Anyway, if you are reading this, I think there are two take-aways:

1. Even those of us who have been around a kitchen for years and years can and do still spoil a recipe and

2. If you happen to do the same thing as I did and have your bread fall, just re-pan it and let it rise again. You’ll get far better results than baking it when it’s flat!

How To Dehydrate Food

How to Blanch and Peel Tomatoes