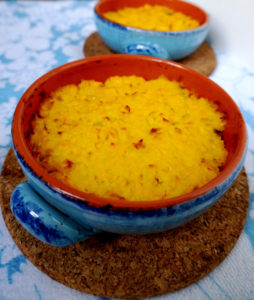 Pastel de choclo or corn pie is a traditional Chilean dish, usually made with cream and shredded chicken. For this recipe I used skim milk, omitted the chicken and increased the flavour of the pino (meat layer) with extra cumin and paprika. The result is a scrumptious corn pie without the extra fat.

I’m a big fan of clay cooking because it builds up flavour, I cooked my pies in individual clay pots but you can use ramekins or a large casserole dish. The recipe calls for olives, egg and raisins, the combinations makes every bite a different experience. In the past I have made it without the egg and the olives for some of my friends and the results are just as delicious, so play around with it and make it your own.

Note: I was out of olives but the recipe and the WW P+ value includes olives.