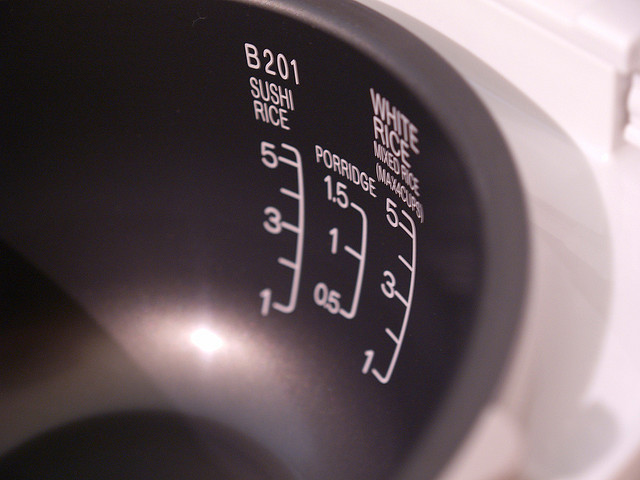 If you are a tech-enthusiast or just want to cook rice that is not just brown or white, then fuzzy-logic rice cooker is the right electronic appliance for you. What is it? Essentially, it is just a cleverer version of the regular rice cookers. It contains a microcomputer, instead of just the on and off buttons that the regular ones have and so, the appliance can adjust the time and temperature according to the type of rice (and even other food items like polenta or oatmeal) that is being cooked. There’s even no need to memorize the rice to water ratio because the fuzzy-logic has those settings too. Hence, the rice is usually cooked to perfection.

What is even more amazing is that the fuzzy-logic rice cookers are not only your best companion while cooking the regular white and brown rice; it can prepare almost all kinds of rice, including germinated and sweet brown. It comes with an array of settings including ‘Quick Cook,’ which cooks the rice 15 minutes earlier than the normal time, ‘Mixed Cook,’ which is to be pressed when the rice is being cooked with other ingredients like vegetables, ‘Keep Warm,’ the button which keeps the food warm after it has finished cooking for up to 12 hours and so on.

However, the saying to remember here is that what you pay is what you get and so, these smart rice cookers come at a price. Even the ‘Best Buy’ deals cannot get you a good one under $80. Then, there is the time issue: unlike the simple rice-cookers that take about 15 minutes to get the rice done, these intelligent ones will take well over 40 minutes.

Nevertheless, the fuzzy-logics are getting sold off the racks pretty rapidly and most customer reviews on the top brands have been majorly positive. So, which are the top brands in the market you ask? Well, here is the answer.

By far the most popular one on the internet and in houses, it seems to be so, more due to good promotion by the company, Panasonic, then due to its functionality in the kitchens. It has a cooking capacity of 5 cups of rice and contains 6 pre-set features, including ‘Keep Warm.’

Most product reviews found of this brand has been negative. Many women across the U.S. have even gone out to say that it takes up unnecessary kitchen space and they hardly use it more than twice a month because the settings are so complicated. Men, on the other hand, have found the settings to be immensely helpful but have complained about the rice going bad quicker than when cooked with regular rice cookers. Some positive reviews say that its pros include durability, ease of use, the ‘Mixed Cook’ function and capacity. The negative points from the reviews on top appliance selling websites are its cost, complicated settings and less-than-expected results from T.V. commercials and YouTube tutorials. Many parents were happy with the cooker though because it could be used by their kids, easily.

So, the product has mixed reviews on the net and our advice is that if you are tech-savvy, have high-capacity or mixed rice cooking needs regularly, have time on your hand to experiment and are not short on cash, then this is the cooker for you. The price ranges between $60 (with deals) and $100.

Priced at just around $115, this 5-cup capacity rice cooker (and steamer) has mixed reviews from its users. It has all the necessary features and settings including quick cook, mixed, porridge and keep warm. Unlike most of its contemporaries, it has two unique functions; ‘Cook Stew’ and ‘Dol Sot Bi Bim Bab’ (to get the bottom layer of the rice crisp and toasted which is a traditional, Korean way of cooking white rice). It even has an adjustable lid which makes it easier to clean it efficiently.

So, why the low price you ask? Well, it has a flaw; if you don’t want undercooked brown rice then the rice must be washed and soaked an hour before it is put into this cooker. Apart from the need to remember this steps customer reviews have been an overall positive for this brand. The price is to functionality ratio is satisfactory, but some have complained about the labels for the water levels being a little unclear. All in all, this is the ‘economic’ fuzzy-logic rice cooker to go for.

It is termed the ‘whiz with white rice’ by many of its users. At a price of around $120 you get this 5.5 cup capacity rice cooker, which comes with regular settings of quick cook, mixed, porridge, reheat, keep warm, etc. and also a special one called ‘Scorch’ (that can toast the bottom layer for a toasty, nutty flavor) and beeps when the cooking is done.

Unfortunately, this fuzzy-logic cooker has mostly generated negative reviews due to its inability to cook brown rice properly and non-removable lid, which makes cleaning it difficult. However, if you are just into white rice and do not want to over-spend, this brand is a good choice.

The most expensive one in this list, it is so, because it is both a rice cooker and steamer. The price is around $180 and it comes with a unique memory setting that remembers how you like your rice from all the previous times you have cooked them. It also has a chime/tone setting (that you can set as per your choice) that tells you when the cooking is complete; this is especially handy during brown rice cooking, because in other cookers this kind of rice starts to degrade if kept uneaten too long. It has a cooking capacity of 5.5 cups of rice and comes with several features including reheat, timer-controlled cooking, porridge cooking and extended keep warm.

Reviews for this fuzzy-logic rice cooker is mostly positive (what do you expect after you’ve paid so much?). Most homemakers find it really useful and use it whenever they want to cook rice or polenta for meals. Some even cook white rice and store it in the cooker overnight, reheat it the next day and serve it without the fear of degradation in flavor and quality. A common pro mentioned for this product is its removable inner lid which makes it easier to clean. So, if you want a really excellent fuzzy-logic from the market and have the money, then go for this one.

Finally, whatever brand you buy, ask yourself these first – what kind(s) of rice would you be cooking, how much money are you willing to spend and (most importantly) do you even need one. Then, take a good look at the above reviews and hopefully, you will be able to choose the best fuzzy-cooker according to your need.